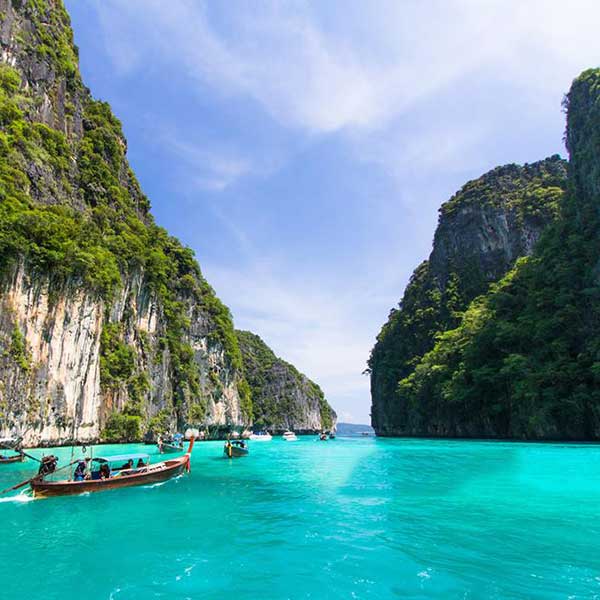 Island Phi Phi Thailand, is the translation from the Thai Koh Phi Phi, is part of a group of islands between Phuket & Krabi, The administration of Krabi is responsible for the area and its beautiful treasures.

Island Phi Phi Don is the biggest of them all and also has the largest population, with island Phi Phi leh coming a close second and also attracting huge numbers of tourists each year visiting its amazing beaches and crystal clear waters.

The rest of the island Phi Phi group comprises mainly if large sheer limestone formations coming up out of the sea like something you would see in a Jurassic Park Movie, they are truly a wonderful visual experience.

Island Phi Phi Don was firstly colonized by Muslim fishermen around the end of the-1940s, before transitioning in to a coconut plantation. Most of the Thai inhabitant population of Island Phi Phi Don are Muslim & make up roughly 80% of the people living there.

If you include migrating workers they comprise mostly of Buddhists than Muslim. The resident population is between 2,000 and 3,000 people which was last recorded in 2013, so there will be a larger number now in March 2019 at the time this article is being written.

Island Phi Phi became World famous and came in to the spotlight after island Phi Phi Le was used as a location to film the very popular film called The Beach starring Leonardo Di Caprio. There were claims and complaints at the time they were making the movie, that they destroyed the natural areas of the beach in order to set it up for their film.

Never the less since the film was shown Island Phi Phi has become legendary around the world attracting hundreds of thousands of people each year who travel to Thailand and make their journey by Thai style Long tail boat, speed boats which carry roughly 23 to 45 passengers on each boat depending on which company you book with and the size of the actual speed boat.

The most popular is the Big Ferry boats, that transport anything from 100 to 200 people on each vessel to get a glimpse of these breath taking natural wonders. Over the past 20 years as expected the environmental impact in certain areas of island Phi Phi have been detrimental.

One particular example is in Maya Bay itself where most of the coral in the Bay had died and populations of fish and wildlife have dwindled due to the arrival of roughly 5000 people visiting the Bay each day. At the end of 2018 The National Parks Management of the area made the decision to close Maya Bay at Island Phi Phi indefinately so they could work on implementing the coral restoration & other programs, and since the time of closure populations of reef sharks and fish have come back to the area.

No one is certain if or when Maya Bay will be opened up again as it takes decades for certain corals to grow. The popularity of Island Phi Phi has not disappeared though with thousands still traveling there every day for shopping, walking, snorkeling and relaxing holidays. Frequent ferry boats to Ko Phi Phi from Phuket, Ko Lanta, and Krabi town starting at 08:30, In the other direction, you can catch the ferry to Phuket, which leaves Phi Phi at 17:00. The one-hour trip costs 800 baht.